Home/Blog, In The News, Student Blog/New Board Member Yolanda Lewis

I had the distinct honor of interviewing and speaking with one of the newest members to the Board of Directors, Ms. Yolanda Lewis. During our interview a few weeks ago, Ms. Lewis spoke to me about following her passions, the leadership qualities needed in today’s society, and what she hopes to give to 21st Century Leaders and its students.

Yolanda Lewis is the Superior Court Administrator and Chief Administrator for Fulton County. She works on the programmatic side of court where she is involved in over 15 justice related programs. Additionally, she supports 20 elected judges, manages 300 employees, and works with public elected officials for both the city, county and state.

She was born in a small town in Alabama where she attended University of South Alabama. She initially wanted to go into healthcare and nursing, but college helped her find her passion when she studied criminal justice and public administration. This passion led her to find her place in the Fulton County Court system in Atlanta. She felt that in the court, she had the ability to give back and participate in community service that could help provide opportunities for others. 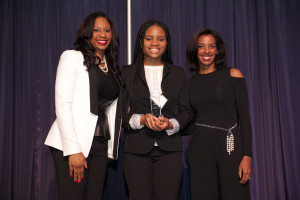 Ms. Lewis, herself, exemplifies leadership. When asked about important qualities in a leader she said that two things come to mind: the ability to embrace change, and willingness to connect with others. She said that this includes, “paying knowledge forward to create the next leader.”

She also notes the importance of mentorship, and how its ok to have several mentors at one time, because “each brings a new perspective, and contributes to your life in different ways.” She herself reflected on how mentors in her life brought her to where she is today. 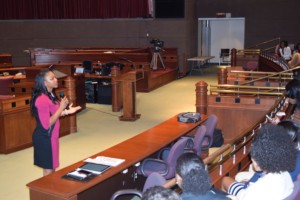 Ms. Lewis first heard about 21st Century Leaders in 2015 when she volunteered for the organization after being named “40 Under 40,” by the Atlanta Business Chronicle. She volunteered as a Coach and Presenter at the Georgia Youth Leadership Awards, and then went on to volunteer as an interviewer for summer programs, as a speaker at SYLI‘s leadership dinner, and as a host and speaker at 21CL’s fall summit, Leadership exCHANGE. Through her interaction with the students of 21CL, she took interest with the students’ motivation to contribute to society. She said, “It was the right place to invest time and energy.”

Now, in 2016, 21st Century Leaders is happy to welcome her as a board member of the organization. As a board member, she strives to support and give to the students by providing them with courthouse opportunities, access to talk with officials, and mentorship connections.

Ms. Lewis has a lot of experience with what it is like to be a young leader. When asked how she overcomes challenges she emphasized the importance of being an “active manager of conflict.” This means helping others come together by finding the middle ground, and being a good negotiator. She also recommends for people to walk into situations they can learn from, and to not be afraid to step outside of one’s comfort zone. To follow in her footsteps here is a 3-step, mini course from Yolanda Lewis herself:

1) Stay humble. Just because you’re in a high position doesn’t mean you have all the power.

2) Accept intentional growth. Do things that help you to grow, because you WANT to, not because it’s just a another guideline from the rulebook.

3) Have a sense of “Impractical Determination.” Don’t let somebody tell you that your goals are unreachable. Those with leadership qualities naturally have a heightened sense of determination.

Check out the latest issue written by our Youth Leadership Council. Take some time to read ab