Jared. D. Howard is a graduate of Redan High School (2013), of Georgia State University (2017) and currently a graduate student at Belhaven University (2020); he works as Admissions Specialist at Morehouse School of Medicine. Jared describes himself as an actor, dancer, and singer who is making waves throughout the entertainment scene in  Atlanta, Georgia and he says that 21CL inspired him in many ways. He says it transformed him to be more vocal and assertive and helped him realize that one can never stop growing.

Paint a brief picture of what you are doing now.
After obtaining my undergraduate degree in Theater performance from Georgia State University, I hit the ground running toward my calling. I work as Admissions Specialist at Morehouse School of Medicine and I spend most evenings and weekends rehearsing, filming, performing or auditioning for various projects. Most recently I was blessed with the opportunity to perform with the Marietta Theatre Company in their rendition of the musical comedy “Altar Boyz” and I am now rehearsing for my second stage musical of the year “HYPE!: The 90’s R&B Musical” with Yash Productions. I am currently featured in a number of independent web series, feature length and short films including “Connect the Series”, “GuyCode ATL”, “Deacon”, “High Stakes Game” and “Miscue”. While competitively dedicating myself to stage and film, I am working on the completion of my first music EP project as well. 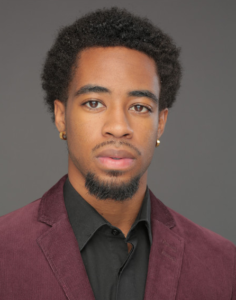 How did participating in 21CL transform you and lead you to where you are now?
Participating in 21CL transformed me to be a lot more vocal and assertive. During my tenure, I learned that when getting things done you have to present yourself in the most professional and respectful way possible, while also making it clear what your goals are and the plan you expect to execute along the way. My leadership skills were certainly sharpened while attending the Turner Voices Youth Media Institute summer program. I found this program extremely beneficial because it opened my eyes to a lot more diversity. I was able to learn from and interact with a wider range of individuals who were not from my same area, skill set or background which prompted me to understand the minds and mannerisms of those around me.
And how did 21CL prepare you for your next steps? Going into college and taking on leadership roles, heading into a new era of professionalism, etc. What skills/tools/perspectives have helped you along the way?
21CL instilled a work ethic and drive that I learned, during my college years, not a lot of people have. In most cases, it is up to you to get things done and no one will spoon feed you along the way. There may be a plethora of opportunities and resources presented to you along the way, but it is ultimately up to you to take advantage and establish your own branding and relationships. Branding was such an integral part of 21CL in my eyes because they taught us at an early age that what you sell yourself as is what people will perceive, so to always be careful and intentional with the relationships you build and power moves that you make.
Which programs did you participate in, and when? What skills did you gain or improve through those programs?
I participated in the WarnerMedia’s Youth Media Institute (formerly Turner’s Leadership Unplugged:CNN Experience) and I served on the Youth Ambassadors for my remaining year in the program. I gained a sense of what I wanted to do with my career. Initially, I had interest in the communications field, a part of me still does, but this program helped me realize that my passion was elsewhere. I gained a better skill of communication and I began to understand the logistics of behind the scenes productions.
What was a memorable or ‘aha’ moment in 21CL? (Particular program, meeting a professional and diverse peers, speaking in public for the first time, etc.?)
Meeting the on air anchors was the most memorable experience. That is when I realized that an on-camera career is what I was destined for. Watching the various promotional packages displayed during the retreat, Brooke Baldwin was actually the first on-camera talent to bring me to that realization, in the same token, she helped me realize that a career in world news journalism was not my peak of interest.
Did 21CL assist you in developing a leadership style that makes you an effective leader? if so how? And have you recently learned something else about leadership? Please share!
21CL helped me realize that you can never stop growing. They allowed me to understand the basics and how to enhance the qualities that I possessed as a leader. I am currently studying to receive a master’s degree in Sports Administration to enhance my leadership skills and broaden my range of knowledge. One key component that I have personally adapted from studying at Belhaven University, is that keeping God first in your decision-making will take you further than you could ever imagine.
By 21CLGiving|Tags: 21CL Alumni, Alumni Spotlight, Belhaven University, CNN, Georgia State University, leadership, Morehouse School of Medicine, Redan High School, Theater, Turner, Turner Voices Youth Media Institute, WarnerMedia, Youth Ambassadors, Youth Media Institute|