21CL Alum Sydnie Cobb is a graduate of DeKalb Early College Academy (2018) and currently a student at Harvard University with a concentration in social studies – this summer, she is interning for Georgia Congressman David Scott! Even at a young age, Sydnie has won several leadership awards including 21CL’s Georgia Youth Leadership Award (GYLA) in 2018, and the Girl Scout Gold Award. She shares about the impact 21CL has had on her and a quote that has shaped her leadership role and stuck with her since participating in 21CL:“A leader is comfortable with being uncomfortable.” READ ON

I graduated from high school in May 2018 and spent my summer interning at CNN, an opportunity that I learned about through my participation with 21st Century Leaders. I am currently at Harvard University with a concentration in social studies and this summer I am interning for Congressman David Scott.

Prior to 21st Century Leaders, I was a timid student who had not tapped into or realized my leadership potential. After one week at a 21CL leadership institute, I remembered leaving feeling confident and empowered, ready to pursue any leadership opportunities that came my way. The confidence and empowerment I acquired from 21CL led me to represent my school as student body president, become a Georgia Youth Leadership Award winner, and earn my Girl Scout Gold Award. 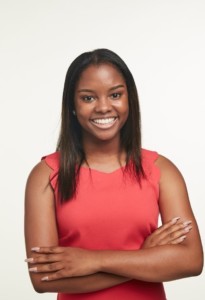 And how did 21CL prepare you for your next steps? Going into college and taking on leadership roles, heading into a new era of professionalism, etc. What skills/tools/perspectives have helped you along the way?

A quote that has stuck with me since participating in Turner Voices Youth Media Institute is, “A leader is comfortable with being uncomfortable.” Whenever I am overcome with apprehension before taking on a new leadership role, I refer back to this quote and remember all the benefits stepping out of my comfort zone has reaped. I am certain that this mindset, along with the other skills I have gained from 21st Century Leaders, will help me evolve into a better leader in college and in my career.

I participated in Turner Voices Youth Media Institute in 2016, served as a Youth Ambassador from 2016-2018, and interned with the Turner Voices program at CNN in summer 2018.  One of the greatest skills I learned from all of these programs is public speaking. From elevator pitches to impromptu speeches, 21st Century Leaders’ programs prepared me for every circumstance of public speaking I will encounter in my professional life.

My “aha” moment in 21st Century Leaders came as I was working on my Gold Award, the highest award a Girl Scout can receive. My project aimed to provide girls in the Kasungu region of Malawi with sanitary napkins to prevent them from missing school due to their periods. A huge obstacle I had to overcome in this project was the exorbitant cost of shipping items from Georgia to Malawi. Utilizing the contacts I gained through networking with 21st Century Leaders, I was able to contact Patrick Solomon, a 21CL Board of Directors member and former CARE executive, who absorbed the shipping costs associated with my project. This experience showed me the importance of networking and using your resources wisely.

To me, an important component of being a leader is helping to foster the next generation of leaders. Throughout my time with 21st Century Leaders, I received guidance from both professionals and my peers that ultimately helped me to secure internships, get into the college of my choice, and complete large-scale volunteer projects. Now, as an alumni of the program, I strive to provide the same level of support and encouragement to younger leaders. To whom much is given, from him much is expected.