Our second spotlight for the month of March is Akul Munjal, a second year medical student at Medical College of Georgia-Augusta University and graduate of Riverwood International Charter School (2014) and of Georgia Regents University (2017). Akul says that he gained a lot from 21st Century Leaders and he opted to serve on the inaugural Junior Board of Directors for 21st Century Leaders in order to give back.

Currently I am a second year medical student at the Medical College of Georgia and serve in the inaugural Junior Board of Directors for 21st Century Leaders. 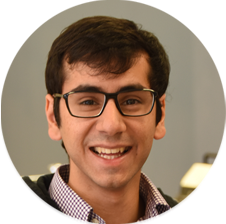 How did participating in 21CL transform you help lead you to where you are now?

If it wasn’t for 21st Century Leaders, I would not be in medical school. I learned how to effectively communicate through 21CL, and 21CL gave me the opportunity to learn about myself and my goals.

Communication and discipline are two fundamental tenants of 21st Century Leaders.  It takes discipline to complete a 21CL program. It is hard for a high school student to spend a week of summer waking up early and doing academic work. It is also hard to be placed in a new environment, and be forced to make new friendships quickly; in doing so one must become an effective communicator.

When I was at Emory G5 (SYLI@Goizueta), one of the summer leadership institutes, one of the first activities we did was a personality assessment, prior to attending the institute, we all took this online survey, and we got the results of the survey at the institute.  I was deemed a blue “logical mathematical thinker” and a yellow “creative thinker”. We then divided up into groups based off of our results, and we were responsible for communicating a message. I have forgotten what the message was, but I remember that every “group” expressed the message very differently, and at that point I realized how everybody can take a piece of information, and interpret in many ways.

Did 21CL assist you in developing a leadership style that makes you an effective leader? If so how? And have you recently learned something else about leadership? Please share!

Prior to 21CL, when I was in leadership positions, I was the person that had to do it all, in group projects I ended up doing all the work. However, through 21CL I learned how to delegate more effectively, and I learned how to make people feel more valued in teams.

Why did you want to serve on the Junior Board?

I gained so much from the 21CL experience, I met some of my closest friends, I got to work on interesting projects while on the Youth Advisory Council, and I also developed my leadership and teaching skills while serving as an 21CL summer team member. I think that I would offer a distinct perspective while serving on this board.